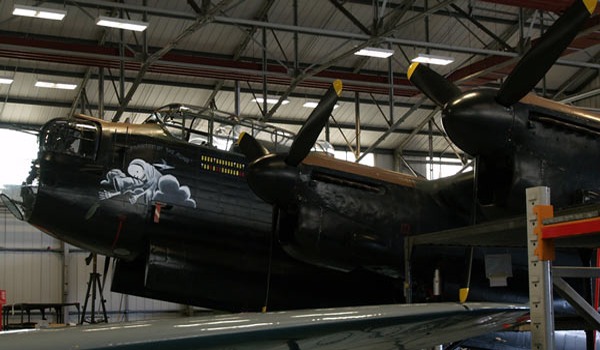 Lincolnshire became known as “Bomber County” during WWII. Poachers Hideaway is positioned right in the heart of this historic aviation region. Lincolnshire offers a variety of visitor centres and sites for the aviation enthusiast to explore, both at active and non–active Air Bases. We also have our very own war-time connections at Poachers Hideaway.

The first few photographs below show you one of two dugouts cut into the ridge of Park Hill, which is the next hill ridge to the south east of Poachers Hideaway. During the Second World War, planes returning from bombing raids would be guided by search lights positioned here. The dugouts were set 1000 yards apart and the search lights in them were used for positional guidance. Planes that had had their navigational systems damaged could then find their way to their airfields across the County. The Home Guard also used an area at the base of Park Hill for rifle practice.

The centre is located on an operational RAF airfield at RAF Coningsby. It operates the only airworthy Lancaster in Britain. There are also five Spitfires, two Hurricanes, a Dakota and two Chipmunks. RAF Coningsby is also home to the Typhoon Euro Fighter. There are viewing areas at the end of the runway for those special photos. Click here to visit their website.

East Kirkby heritage centre is home to the Lancaster. She is one of only four Lancaster’s remaining in the UK. East Kirkby is also the only place in the country to see a Lancaster Bomber on an original wartime airfield. You can also ride in it! (pre-book only). Special events are held here throughout the year. These include night-time taxi runs, concerts and firework display. Further exhibits at the centre include aircraft Hangars and an, original Barnes Wallis Bouncing Bomb. There are also military vehicles, a NAAFI, a Station Chapel, a Control Tower and an Escape Museum. Click here to visit their website.

Built in 1940 and formerly part of RAF Woodhall Spa. The site includes Officers Mess, Airman’s Dining Halls, a NAAFI and Ration Store. The visitor centre depicts the story of RAF Woodhall Spa, Squadrons 97, 617 Dambusters, 619 and 627 that were based there, together with Civilian Life in Lincolnshire during WWII. Click here to visit their website.

Metheringham Airfield Visitor Centre is a small museum, supported by The Friends of Metheringham Airfield. The centre is dedicated to those men and women who flew and supported RAF 106 Bomber Squadron from 1943 until the end of the second world war. The visitor centre contains an abundance of information. It displays many artefacts that relate to those flyers, aircrew and ground staff who flew and offered support to the squadron during its presence in Metheringham. Click here to visit their website.

RAF Scampton was the home of the Dambusters Squadron during World War II. Scampton is currently known as the home of the Red Arrows aerobatic display team. The museum covers the history of the station and lists a number of exhibits relating to 617 Dambuster squadron as well as a Blue Steel Missile. Please view their website for details and note you must contact them prior to visiting (Photo ID is required). Click here to visit their website.

The Sector Operations room bunker has been restored to its former wartime glory. It is a tribute to all those who served and fought during the Second World War. The museum also contains, RAF documents, Squadron histories, Operation record books, photographs, uniforms and many more exhibits. Please see their website for further information prior to your visit, by clicking here.

Newark Air Museum is located on the former RAF station of Winthorpe. The museum is one of the UK’s largest volunteer managed aviation museums. The diverse collection of aircraft and cockpit sections covers the history of aviation. The aircraft on display include 13 National Benchmark aircraft; 34 Significant aircraft and 21 Noteworthy aircraft as listed in the National Aviation Heritage Register. Nearly two thirds of the exhibits are now displayed inside. In addition to the aircraft, the museum houses a diverse display of aviation artefacts and a collection of more than thirty aero engines. Click here to visit their website.