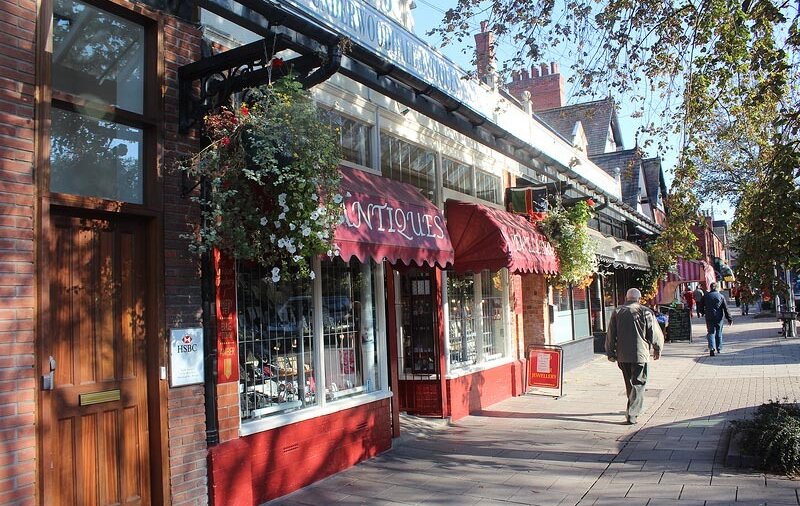 Woodhall Spa is located about six miles to the south-west of Horncastle. Woodhall Spa, like us, is situated on the Viking Way so you could walk there direct from Poachers Hideaway.

The village came about almost by accident in the early 19th century when the then Lord of the Manor, Thomas Hotchkin, discovered that the spring which had arisen from an earlier abandoned coal mining speculation was actually quite mineral rich. He then set about creating the Spa Baths, which remained open until 1983.

The village has retained much of its Victorian elegance, helped by it having been made a conservation area in 1991. The opening of Woodhall Spa Railway station in 1855 contributed greatly to the increasing popularity of its spa facilities. Richard Adolphus Came was largely responsible for the elegant design of the spa town which grew as a result. His designs stipulated that none of the roads should be streets but rather tree lined avenues, something which survives today.

Jubilee Park with its heated outdoor swimming pool is a very popular attraction in Woodhall Spa. There are also tennis courts, a bowling green, croquet and a children’s playground. Tucked away in the Pinewoods is the Kinema in the Woods. This quaint cinema is famous for being the only remaining back-projection cinema in the country. An original Compton Kinestra 3 Manual/ 9 Rank Organ is a relatively recent (1987) addition to the entertainment at the cinema. A popular event in recent years has been the Woodhall Spa 1940s Festival. The festival usually takes place at the beginning of July.

There are many associations with wartime history in Woodhall Spa. Many of the large houses here were opened up as hospitals for the sick and wounded during both wars. In addition to these, one of the most famous wartime RAF squadrons was based in the town. Petwood House, which was originally home to Sir Archibald and Lady Weigall. The Royal Air Force requisitioned their house in the Second World War. In 1943 it became the Officers Mess for 617 Squadron (the Dambusters) who flew from RAF Woodhall Spa after moving from Scampton. The house is now a beautiful country hotel, set in 30 acres of attractive gardens and woodland. The Squadron Bar houses a collection of photographs and memorabilia from the time the squadron spent there.

The first weekend in July sees a packed programme of events taking place as part of the Woodhall Spa 1940’s Festival. There really is something for everyone over the course of the weekend. Events encompass all sorts of music concerts, cinema and historical events. Plenty of opportunity also to spend money on a wide range of trade stalls. There is even a 1940’s themed Children’s Party on the Saturday morning! We are only 20 mins away from Woodhall Spa, so why not book a cottage so you can make full use of the whole weekend as we may have some deals available!

Nobody will want to miss the Battle of Britain Memorial Flight flypasts. These are scheduled to take place on both days at midday, weather and other circumstances permitting. We are also delighted to see that the Thorpe Camp Visitor Centre will be opening its doors on the same weekend between 10:00 am and 5 pm (they normally only open on Sunday afternoons) – highly recommended for a visit, especially to sample the home-made cakes in the NAAFI!

Those of you who really want to get into the swing of things might like to check out the competitions that the organisers are running for best dressed man, woman, boy, girl and just about everything else you might be able to think of. Not just costumes, but also vehicles, re-enactors and businesses will be able to offer themselves up for the scrutiny of the volunteer judges. There will also be a photographic competition. This is open to all via the Woodhall Spa 1940’s Festival Facebook, Flickr or Instagram pages.